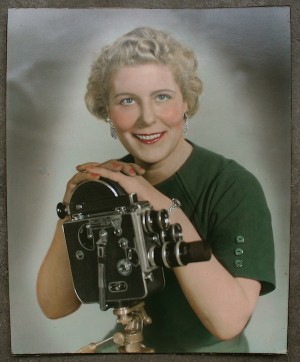 Behind the Scenes at Central Cinematographers (1963)

Chicago movie-maker Margaret Conneely (1915–2007) was active in amateur filmmaking both locally and internationally for nearly half a century. She is best known as a producer and director of scenario films, film competition judge and as an exhibitor. In 1949 Conneely joined the Metro Movie Club, an amateur film club based in River Park and Chicago, Illinois. She was also a member of the Chicago Cinema Club and the Glenview Moviemakers and was an active member of the Chicago Area Camera Club Association, the Photographic Society of America (PSA) and the Amateur Cinema League. While a member of PSA, Conneely served as organizer and chairman of the PSA's first International Competition (1952-1953) as well as chairman and secretary for the PSA Motion Picture Division and chairman of the 1963 PSA National Convention Committee. In the 1950s, Margaret’s films won awards from major amateur contests in both America and Europe. In 1956, her film The Fairy Princess (1956) won the International PSA Harris Tuttle Trophy for Best Family Film. By the 1960s Conneely had become a highly regarded film competition judge, attending amateur film festivals around the world. Conneely judged competitions for the PSA, Chicago Area Camera Club Association, Institute of Amateur Cinematographers and local film clubs. Conneely also wrote articles on amateur film that appeared in local club newsletters, the PSA journal, Panorama Magazine, Chicago Tribune and the New York Times. Additionally, Conneely presented and took part in lectures, demonstrations and programs in the 1950s and 1960s to further the art of motion picture making. She presented at Chicago-area camera clubs and at conventions for the Institute of Amateur Cinematographers and PSA. Margaret later went on to become the director and chief photographer of medical photography and illustration at Loyola University Medical Center in Maywood, Illinois. Chicago Film Archives