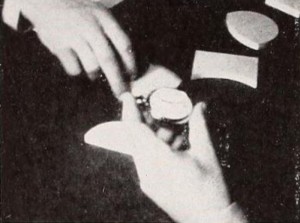 "In order to acquaint medical students with actual mental types observed in basic years of study, Jon B. Goldsborough has made Clinical Types of Mental Deficiencies. The film is not planned as an exhaustive study of types, but rather as a way to direct attention to symptoms and expressions in mental cases by showing specific examples of the diseases studied. The picture proceeds in an intelligent, orderly fashion, by bringing each definite type to the screen preceded by a simplified case history and the name of the specific disease. The film is marked by precision, clarity and intelligent planning and editing. Mr. Goldsborough has accomplished admirably his purpose of making a direct teaching aid, to be used in conjunction with extended commentary and lecture in the field of psychology and psychiatry." Movie Makers, Dec. 1944, 495.

"Whither Flowing," depicts the nervous evils caused by parents in the thoughtless upbringing of children. The drama was compactly told, well acted and directed, and was marked by unusual photography." Photoplay, Nov. 1929, 67. "...Whither Flowing is a psychological study of hysteria.... Dr. Heise's Whither Flowing won second award in the dramatic division of the recent Photoplay Magazine contest...” Movie Makers, Feb. 1930, 104.