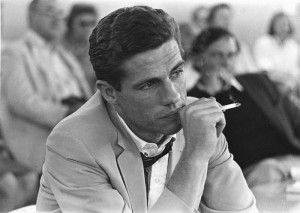 "An award-winning documentary filmmaker, James Blue was a truth-searcher and communicator, an aesthetician, master teacher and actor; a journalist, a poet, a film pioneer. Blue was a generous spirit who gave himself without reservation to his colleagues, his subjects and his art. In 1980, James Blue died at the age of 49, leaving behind a remarkable legacy. A rebel, a storyteller, a world citizen, an award-winning filmmaker and a revered educator, Blue’s life and work continue to influence filmmakers, artists and agents of social change." Jamesblue.org

"As a teenager, he began experimenting with filmmaking with an 8mm film camera. While a student at the University of Oregon, he was active in theater and radio productions. In 1952, he produced a popular 8mm film parody of Shakespeare’s Hamlet with college friends." Archives West.

Filmography at Jamesblue.org, and profile on IMDb.

The James Blue papers, 1905-2014, are held by the Knight Library at the University of Oregon.