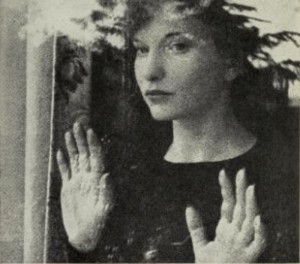 Deren in her film Meshes of the Afternoon.

"Maya Deren (American, 1917–1961) was a visionary of American experimental film in the 1940s and 1950s. A precocious student, she studied poetry and literature at New York University and Smith College, where she became interested in the arts. While working for modern-dance choreographer Katherine Dunham, Deren met her future husband, filmmaker Alexander Hammid, who introduced her to European avant-garde film. In 1943, the couple collaborated on the short film Meshes of the Afternoon, which has since become one of the most widely influential films of the American experimental-film movement" The Museum of Modern Art.