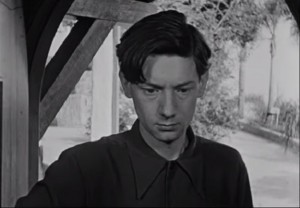 Hammid in Meshes of the Afternoon.

"Born Alexander Hackenschmied in 1907 in Linz, Austria, Alexander (Sasha) Hammid grew up in Prague, and became a major figure in the circle of avant-garde Czech photographers in the late 1920s. He devoted himself to cinema in 1931, making his own experimental films and photographing and editing others’ films, including anti-Nazi documentaries for other directors. Fleeing the German occupation in 1939, Hammid settled in New York. In 1942 he met Maya Deren, for whom he photographed the landmark American short film Meshes of the Afternoon (1943). Hammid worked for the Office of War Information in the 1940s, and for the United Nations in the 1960s, completing poetic pieces and socially relevant documentaries. Some of his most notable works are Valley of the Tennessee (1944), The Private Life of a Cat (1946), and, with Francis Thompson, to be alive! (1964), a pioneering multiscreen environment, and To Fly (1968), one of the earliest IMAX films. Hammid died in 2004" The Museum of Modern Art.