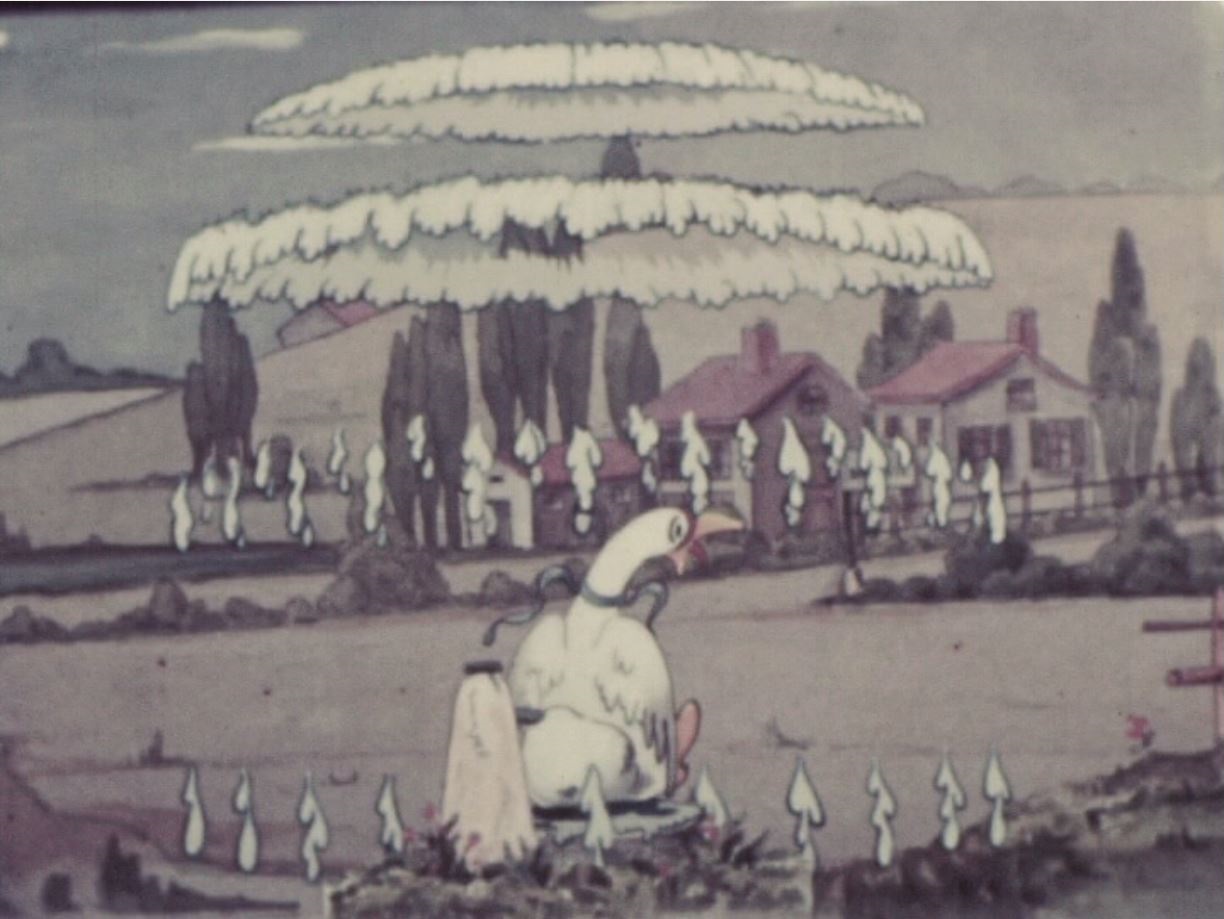 "To the producer of Ducky 'n Busty must be given the palm of accomplishment for making the first 16mm. cartoon story in Kodachrome that has come to the attention of the League. Plenty of publicity has been given to the immense amount of detailed work that goes into making a theatrical screen cartoon. In Hollywood, this is done by a large staff, but Emile Gallet, producer of this unusual film, performed every bit of the work himself. This included the construction of a special apparatus for shooting color film, frame by frame, the arrangement of proper lighting and designing an alignment device for bringing each separate drawing into correct relationship with its predecessor. In addition, Mr. Gallet, who is an artist, planned the scenario and executed each separate drawing in color. The monumental effort thus involved may be deduced from the fact that there are forty frames to each foot of film and that Ducky 'n Busty runs to a length of 400 feet. The subject matter of this amusing cartoon is of the type familiar in theatrical productions, wherein the antics of birds and animals repeat the foibles of humankind. In imaginative color design, fine technical work and sheer achievement in this field, into which so few amateur workers have ventured, Mr. Gallet rates highest praise." Movie Makers, Dec. 1937, 629.

"Before you undertake too lightly the production of an animated cartoon in color, you may want to contemplate some of the facts and figures on Ducky 'n Busty. recently completed in New York City, by Emile Gallet, ACL. Starting work soon after Kodachrome was introduced, Mr. Gallet has produced some 6,000 separate designs and over 2,000 individual cutout figures to effect the needed animation. More than 4,000 hours of work were expended in production, of which 120 were used in filming alone. Sixty flood bulbs burned into blackness during the long and heartbreaking process. Now, Mr. Gallet has a finished and delightful fantasy, to which music and dialog are being added. As far as we know, it is genuinely the first amateur produced, 16mm. cartoon in color. As far as Mr. Gallet knows, it certainly will be his last, as well." Movie Makers, Nov. 1937, 530.

The first "cartoon" to be recognized by the ACL Ten Best.