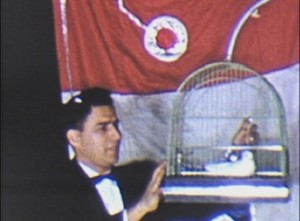 Ramon Galindo performing a magic trick in one of his films. Texas Archive of the Moving Image.

"Inspired by his mother’s love for photography, Galindo bought his first camera, an 8mm Brownie, when he was a child in Austin during the 1920s. Although Galindo describes himself as a creator, unable to sit still and always making things, we believe that Mr. Galindo defies any definition! A professional tailor for most of his life, as documented in his beautiful self-made instructional films, Galindo’s true passion is magic which he has performed all over the world. Galindo has used film for over 70 years to record his magic tricks, showing others his work as well as to help himself perfect his techniques. In addition, Mr. Galindo’s collection serves as an important chronicle of the Austin community, as the filmmaker has consciously prioritized documenting the changing urban landscape throughout his life" Texas Archive of the Moving Image.