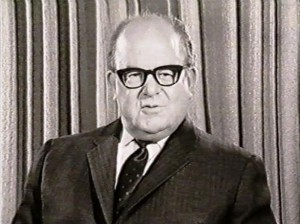 "Oscar C. Burritt and Dorothy Burritt (nee Fowler) were film enthusiasts and amateur filmmakers who lived in Vancouver until 1947. Oscar C. Burritt also worked as a professional cinematographer and film director. In later years he worked for CBC television in Toronto. Both the Burritts were active in the film society movement, including the Vancouver Branch of the National Film Society (later the Vancouver Film Society) and the Toronto Film Society. Dorothy Burritt was a founder of the Canadian Federation of Film Societies." (British Columbia Archives.)

Starting in 1943, Oscar Burritt shot and directed industrial films for Leon Shelly at Vancouver Motion Pictures, including a handful of NFB shorts. In 1946, when Shelly moved his operation to Toronto (as Shelly Films), Oscar moved east and continued working for him. In 1950, he joined the CBC to help in the run-up of film services for television production at CBLT. One of the films Oscar directed for Shelly Films was Beans of Bounty (1948, for Victory Mills); it was co-winner in the Non-Theatrical category at the first Canadian Film Awards in 1949. (D.J. Duffy)